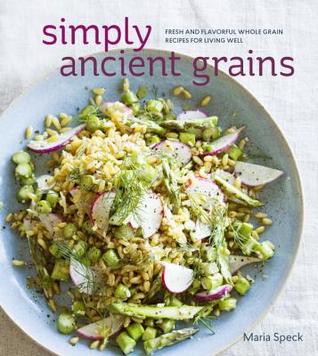 I have always thought of ancient grains (you know, things like quinoa, barley, millet, etc…) to be “exotic”. Or, at the very least, too exotic for me (a self-defined simple, ordinary, every day cook) to be cooking with. This book has made those grains much more accessible. It’s made me much more at ease with even the thought of trying more “ancient grain” recipes.

Many of the recipes I read through are fairly simple and seem pretty easy to put together. Not too involved (some a little more so), but nothing too crazy. For example, I made the “oatmeal butternut pancakes with brown buttered nuts” (pg 55) the other day (disclosure: I didn’t do the buttered nuts, although they sound absolutely amazing). But the directions went along the lines of: start the night before; put all ingredients in food processor; refrigerate overnight; make pancakes in the morning. That works for me.

I look forward to using many more recipes from this book!

~~~~~
Disclosure: I received this book for free from Blogging For Books in exchange for my honest review

The Day is Waiting. Illustrated by Don Freeman, words by Linda Zuckerman. Appropriate for any age child.

The truth is, you could do any of these. Sometimes you have to actually get up and go, and some times it just takes a little imagination.

This picture book, illustrated by Don Freeman, creator of Corduroy, is full of these imaginative things that one could accomplish in any given day, if only we’d take the time to experience them. The words are simple. I believe that they’re telling us, though, to seize the opportunities presented in any given day, even if it’s something as simple as going out to smell the flowers.

The message I get from this book is to simply “be” in God’s creation and to enjoy it. Sometimes I think we’re all a bit too rushed to enjoy things as they’re presented, and this is a very calming, relaxing, beautiful book to remember to just stop sometimes and take a little break.

~~~~~
Disclosure of Material Connection: I received this book free from the publisher through the BookLook Bloggers book review bloggers program. I was not required to write a positive review. The opinions I have expressed are my own. I am disclosing this in accordance with the Federal Trade Commission’s 16 CFR, Part 255 : “Guides Concerning the Use of Endorsements and Testimonials in Advertising.”

I guess it’s a little tiny bit hard to make out much detail, but I’m currently reading:

The Count of Monte Cristo (can’t quite tell from this picture, but I’m only at 9% and book club discussions are happening NOW!!!!)
So, just as soon as I finish up Cress, which is getting done – just hard to read when you’re interrupted every other paragraph to answer questions/comments like “mommy, does 4+4+10 equal 13?” {side note: I admire my 5yo for thinking through math questions, the majority of the time he gets them right, but multiple times for this one was just not helping this AM}… anyway, just as soon as I finish that book I’ll be able to focus a little more exclusively on Count.

You know how I said in my reading post a few weeks back that I was only going to try and read the twelve books for the bookclub, plus just a few more? For the year? Yeah, so I have already added two more to the reading list for this month alone. And I can foresee this becoming a problem in future months. Maybe I should make some sort of a plan….

Alright onto my crochet project.

I am attempting to make a baby blanket for the new arrival. The blanket is supposed to be rectangle I promise, just that first chain row somehow has ended up tighter than the following rows so it seems to be turning… Details of the project, I’m using leftover yarn make this. Maybe it seems a little “cheap” to not go and buy new yarn for a new baby, but in all honesty I have SOOOOOOO MUCH YARN, like I’m not even kidding. So I found {hopefully} enough of three colors and am going to try and start using up some of my stash!

Anyways, this is my first ever baby blanket. Totally isn’t hard. It’s not even so repetitive that it’s boring. So all of those are wins!

I started it this early (with just about 11-12 weeks to go) so that I can hopefully bring it with to the hospital for him. 🙂

Anyways, enough rambling for this evening. Joining in with Ginny’s weekly post

So, where should I start? Here’s my original post in which I was way too ambitious, but aren’t I always?

According to part of *that* list I wrote down:

√ The Fault in Our Stars by John Green
{cry}

by Ann Ratchet
√ Hands Free Mama: A Guide to Putting Down the Phone, Burning the To-Do List, and Letting Go of Perfection to Grasp What Really Matters!

by Rachel Mary Stafford
{didn’t care for at all… just too…. ideal??}
√ Beautiful Ruins

by Jess waters
{so-so. Not bad, just… didn’t quite hit me the right way}
√ Bossypants

by Tina Fey
{ditto to just above}
√ Outlander: A Novel (Outlander, Book 1)

by Dorothy Sayers
√ Gilead: A Novel

by Marilyn Robinson
√ The Husband’s Secret

e Invention of Wing by Sue Monk Kidd
The Little Oratory: A Beginner’s Guide to Praying in the Home

by Bob Welch (book review book, started last year… need to finish ASAP)
Joy to the World: How Christ’s Coming Changed Everything (and Still Does)

In addition I read a number of other books spread out throughout the year and mostly listed out monthly posts. (At last count I had 46 books read for the year, two more going right this second which I would *love* to finish before the end of the year, but we’ll just have to see… given the very full year we’ve had, I consider this a total win in the reading department 🙂 )

So… what’s in store of the upcoming year?

Well, I found this book club over at Deliberate Reader (which BTW, she has some great stuff, so if you like books and reading, etc… do go check her out), and I like the look of the books listed, so I think I’m going to try and do that.
* The Count of Monte Cristo (January – this was probably one of my favorite books when I was in my teens, but I’ve only ever read an abridged version. I’ve heard the unabridged is that much better, so I’m looking forward to it. And final note, since the discussions start in early January, I should probably begin reading, that being said, I probably won’t be contributing hugely to that discussion, but I’m still wanting to read the book and this is a good “excuse”)
* The Black Count: Glory, Revolution, Betrayal, and the Real Count of Monte Cristo

by Tom Reiss (February)
* The Chosen

by Chaim Potok (March – I actually read this years ago… like maybe 15?… so technically a re-read)
* Station Eleven

by Emily St. John Mandel (April)
* Empire of the Summer Moon: Quanah Parker and the Rise and Fall of the Comanches, the Most Powerful Indian Tribe in American History

by Robert Galbraith (July)
* Climbing the Mango Trees: A Memoir of a Childhood in India

by Hannah Kent (September)
* The Legend of Sleepy Hollow

(October)
* David and Goliath: Underdogs, Misfits, and the Art of Battling Giants

by Malcolm Gladwell (November)
* The Hobbit

In addition to that I really don’t know. I’ve had a vague idea for… years… that I would like to just start on one shelf of the bookshelf and read the books in the order they come up.

I doubt I’ll actually do *that*, but we have a new baby coming next year, and if it’s anything like the last time we had a new baby, I found it hard to read. Not that I found it hard to find time, in fact there seemed to be plenty of time to do actual reading, but I found it hard to read a paper and ink book while nursing (just can’t quite figure out how to easily hold book and baby *and* turn pages, especially if it’s heavy). So, if somehow I can arrange for all the books on my real wooden bookshelves to just get onto an electronic reading device {without paying any actual money}, we’ll be all set 🙂 .

That being said there are a few I really would like to try and get through (in no particular order):

* Les Miserable (still ~ I think I made it just about a quarter of the way before I stopped last time)
* In This House of Brede by Rumer Godden
* The Rest of the Anne of Green Gables Series (I finished though book 3)
* Another book or two from the Outlander Series (I finished through book 3)
* The rest of the Catechism of the Catholic Church (call me weird, that’s fine, but it’s something I started this year and made it just about half way before I got off “schedule” and kinda just didn’t ever pick it up again ~ honestly the parts I read have been fascinating and I would really like to finish it.)

That’s my reading shtuffs I got for this “year end/new year” post. Simpler than last year? I hope so.

I had the opportunity recently to review this new young adult novel, A Single Bead by Stephanie Engelman. It is published by Pauline Books and Media and set to release in January 2016.

It follows the story of Kate, a teen who lost her grandmother in a tragic accident. During a memorial service she happens upon a single bead from her grandmother’s rosary. Throughout the story she finds others who have found beads from the rosary and discovers that many miracles have occurred for those who’ve found them.

This story was surprisingly engaging. It flowed really well and was very thought provoking. Even though it was a work of fiction it definitely challenged my thinking on the power of praying the rosary. Personally, praying the rosary is a devotion which I go back and forth on. Once I begin and/or finish a rosary I find that I am much more at peace, as is Kate in the book. But the mental block to even starting one (and the excuses that come with it) can really be a big hurdle.

I would say the book is written with a young-middle teen audience in mind, but even though, I think sometimes we just need to hear things simply. Sometimes we have the tendency to over-complicate messages. The book does a great job of “showcasing” the power of prayer in a simple and easy to follow way.

A quote that I keep coming back to:

“I think all of this is reminding us that we’re all connected, and that even one single prayer – one Our Father or one Hail Mary – counts. That’s the power of a single bead.” {emphasis mine}

I love how this ties in – in a very real and tangible way – how each bead is more than “just a bead”, it’s a very powerful prayer. Which I have a tendency to forget in the day to day, and I’m glad for this book to remind me of. 🙂

I received this book free in exchange for my honest review.

Working my way through my reading list, one book at a time: